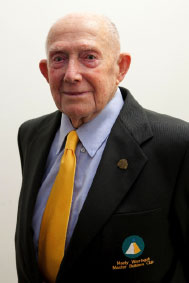 Wally served on the Board of Directors of the Manly Warringah Master Builders Club for an unrivalled and amazing 60 years. Holding the position of Honourable Secretary from 1966 to 1968 and the stood as President from 1968 to 1970.

Wally’s commitment to the Club was second to none, hence Wally being awarded Life Membership and bestowed the Office of the Patron. Until his dying day, Wally served the Manly Warringah Master Builders Club with integrity and distinction.

He will be sorely missed.